I am writing this report based on a Core logic report I received on May 2nd and since then a lot has happened. Let’s see where the world is taking us this quarter. 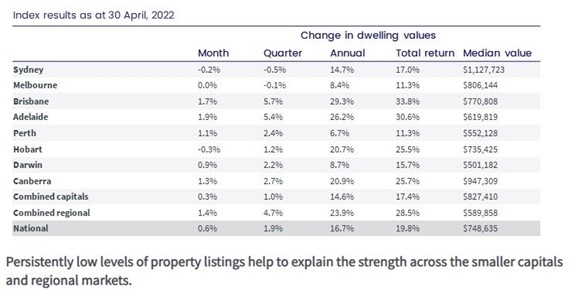 Banks and lenders are very astute and keep a very close eye on the country and the world around us as well. They have well founded concerns:

The Ukraine crisis is still going and has every possilbity of evolving into a full war, with the USA and Australia by default being committed to it.

China’s not-so-soft diplomacy in the South Pacific and increasingly aggressive rhetoric towards Taiwan. This has more profound implications for the Australian economy and immediate concerns for our shipping lanes and ability sell to export markets other than China.

Australia has voted in a new government with a significantly different set of policies with regards to wage growth, government deficit/ resulting taxes, and economic management.

Australia’s staffing problem: there simply isn’t enough people, and this scarcity of labour is causing upward pressure on wages. Unemployment is at 3.9% which is as low as is technically possible and employers are outbidding each other to get the people they need.

Australia is heavily dependant on road and rail transport and that means Diesel, and lots of it. With oil at USD$100/barrel with no reduction in sight, diesel is driving up the cost of foodstuffs on its own, putting pressure on household budgets.

Lastly, the new labor government has promised wage increases in line with inflation, which is widely believed to further exacerbate the issue of inflation, putting significant pressure on small to medium businesses (The country’s biggest employers) that are already struggling to break even.

All of this causes great concern for lenders as all of this directly affects the available cash that consumers have and the stability of their employment. Reasonable wage increases are fine, however steep increases in wages and the costs of living have a habit of quickly overtaking them.

The result is a tightening of the credit policies that lenders use to decide if you can afford a loan and how much they value the property you want to buy. Each bank values a property through its own set parameters.

To prevent housing bubble, the lenders are scaling the housing prices in an effort to stop them running away.

Our friends as Core logic also stated “The RBA recently noted a 2-percentage point rise in interest rates could lower housing prices by 15%. Under this scenario, which CoreLogic recently explored in detail, shows national dwelling values would be at a similar level to where they were in April 2021. Those who purchased a home over the past year will could see the value of their home fall below the purchase price.” – Source Corelogic.com.au

We are already seeing prices softening as shown below: 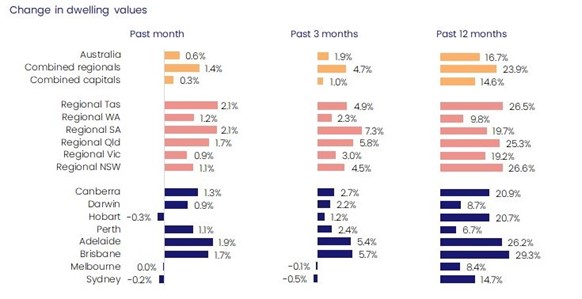 The Coalition’s superannuation housing policy was considered to be a saviour, bringing new borrowers into the market, new demand and solidifying valuations. This is no longer the case.

This presents us with the scenario of a “correction”, or as it was described to me: High inflation + excessive wage growth+ high cost of living+ big spending/ big taxing government = “the economy turning faster than a prawn left in the sun”.

Should we reach a point where borrowers can no longer cope, employers downsizing their businesses and inflation continues to rise, lenders will be forced to insure against the risk of default. This is bank jargon for interest rates rising to levels last seen in the late 1980s; 15-19%.

Now that we’re all sobered up by that, where do we go from here? Well anywhere, these conditions present opportunities, but I would advise that you get yourself organised and be absolutely sure of your capacity to borrow in the event that interest rates rise before you buy.

An ounce of caution prevents a ton of cure.

As I add my two cents worth to this article on the seventh of june, the Reserve Bank of Australia has just lifted the cash rate by 50 basis points, the largest single increase in more than 20 years, to 0.85% .

What needs to be understood from a developers perspective is that the rates themselves are not a big issue. It is the rate of change that interest is going up that is troubling. The two year international swap rate was about .90% in October 2021, and it was nearly 2.80% end of April this year. More than triple in 6 months.  This is the rates the big banks get their money at- and they have no choice but to pass this on or eat into their margins (which they dont) , their reserves and savings (whick australian banks dont have). Or we could print some more money, but that would just keep driving inflation further. In short, as Troy has hilighted, climbing rates are here to stay, and its about learning how to cope with it. The warren buffet line- look for how you can be greedy whilst others are fearful.

Whilst rate hikes can be costed into a project, this will have key consequences for affordablity for the consumer- the person signing the 40 year mortgage. Covid household savings are dwindling, and the full impact of  inflationary CPI pressure outstripping wage growth significantly is being felt. The focus needs to be on supplying affordable housing, meaning product that meets peoples living needs and that they can afford. That doesnt mean cheap, but it means providing the right product to the right market segment. The WA economy is in full swing, and there are more people starting to move here. Wages are healthy and on the up. The state goverment is flush with cash. It is very affordable- and there isnt a lot of supply. So prices here, regardless of interest, will keep going up, even if the rate slows a bit. And you can still make the most of this for the years ahead.

The well publicised woes in the building industry arent helping supply or peoples appetite to build, further putting pressure on housing supply. We have a huge backlog of build commencements  to get through, with nearly 2600 build a month getting planning approval in march of 2021. This has now fallen to a more sustainable level of 1100-1300 month on average for the last three months. There would, as a consequence, appears to be a light at the end of the tunnel as far as delivery capacity and pressure on labour and materials is concerned. Once we clear this backlog, probably 12 months from now, values should have lifted, the market growth become more sustainable, and we will have a clear picture of who is left to provide building services at a price you can actually quantify. The question is, what do you do in the interim period, the next 12 months?

Everyone is spooked by interest rate rises and building bankrupty horrow stories at the moment. The reality is though, people need places to live, and the vacancy rate is record low at the 1% mark. Supply is hamstrung- both values, and rent particularly, can only go up in WA from here.

In the coming months is actually a good time to place yourself to tap into the affordable housing market as a developer.  That means build to rent, medium density outcomes that utilise efficient and innovative construction methodologies, to supply affordable housing solutions to a market with higher interest rates that lower income people wont be able to service in a few years.

The WA state government is even backing this approach. Developers will receive a 50 per cent land tax discount for build-to-rent projects in Western Australia’s budget released a few weeks ago, effective form July 2023. So the timing is perfect.

People arent scared of the rates as much as they are of change. Your job is to keep a clear head and look for the sensible opportunities when everyone else is lamenting that the old way of doing business doesnt work any more. So dont fight it- run with it. Work with what is to hand. Now is a great time to get planning. Find a site, learn about the new Medium density codes, and get a DA together so you are ready to pull the trigger when the market stabilises after the current period of reeling from a few rate hike shocks and half the builders going broke. That too will be old news 12 months from now- look past it.

in the next month or so, we will do a feature piece on what the future looks like and where the opportunities lie ahead.

In the interim, get in touch to discuss more immediately what your best course of action is going forward.